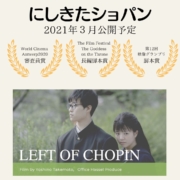 Here is the trailer of “Left of Chopin”

I supplied some theatrical properties, such as a portrait, a magazine cover for the film, and had taken so many backyards photos.

In the movie shooting period, I watched so many scenes including preparing. The director rewrote the script for 19times!!

It is an independent film, so they do not have enough budget. One staff has to play many roles, and Many people did cloud funding for this.

This story is about two pianists.

Although this is a story about a pianist, it is also about the director.
The protagonist, Kentaro is obsessed with becoming the best. A piano is just a tool for achieving his goal. In the final scene, he hears music that changes him – something that seemed impossible.
While making independent movies the director was always thinking [How do I get nominated] [How do I win the festival?] – she felt hollow whether she won or not.
Then, she saw a movie that touched her heart. It opened her eyes to the fact that what touches you must be sincere. In this film, she tried to communicate that with sound.

Here is an article introducing the movie.

Born in Hyogo prefecture. I started shooting mainly at contract studios in Kansai and has been shooting for 14 years.

With over 150 bride and groom shoots, over 15 dance magazine publications, and over 20 dance orchestra shoots, she is good at capturing moments of facial expression and movement.

I accept requests for event record photos and profile photos.

I also welcome requests for those who want to utilize materials that convey images, such as images of people who express themselves and flyers for attracting customers. Send me a message from the Contact form.

Want to join the discussion?
Feel free to contribute!